We’ll get to the comic in a moment, first, I’d like to introduce you all to a fun little game I discovered about a week or so ago; Champions Online!  Found it through Steam and it’s a Free To Play (F2P) MMORPG. It’s actually really fun!  You create your own super hero with a wide variety of super powers (note: F2P has limited “classes” and you can still choose from 5 or so travel forms… flying is my fav).  The quests are darn fun and you can adjust the difficulty level.  And the levels designs are just beautiful (turn off the “half resolution” setting… it makes it look all horribad when on).  Love it!  Oh, and before I forget, one of the best features is the absolutely free form character creation!  You can make just about anything (more on this later).  Interestingly enough, gear enhancements don’t (except for “spell replacements”) change your looks.  Your character always looks the way it does unless you go to a Tailor and change it (which you can do any time for no real world money).  I kinda like that because it lets you connect with your character better, not like other games where you forget what your character looks like after the first few levels of piling armor on top of them. 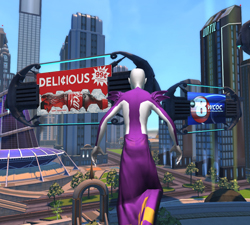 Now, you should know by now that I love me some F2P.  I play a LOT of it.  But it just drives me crazy when they totally ruin games with bad financial models.  CO is different.  I won’t say it has the most ideal model, but I think it has the BEST model given all of the current F2P MMOs.  See, most F2P will charge you for things you NEED, such as recovering from Death Penalties or cash shop gear you must have to be competitive; CO’s cash shop is mostly cosmetic.  And that’s how it should be!  Cash shops should NOT force you to purchase items that make you more powerful or even items that give you game play.  By that I mean, that incense stuff in Allods you need to recover from death or in Spiral Knights (btw, this game was a huge let down… so much potential…) where you can’t actually play parts of the game without certain cash shop resources.  CO lets you play THE ENTIRE GAME for freeeee!  All you buy from the shop are bag expansions, rename tokens, some leveling items, cosmetic stuff, and mini expansions (which are cheap and optional).  However, the subscribers are given a cash shop stipend, some cosmetic things, AND additional “classes” to choose from.  Lifetime subscriptions ($300) can actually create a custom class, which one could argue gives them superior abilities and advantage, but the basic F2P classes aren’t bad and can solo most of the game… if you get stuck, get some buddies!

So that’s that.  Good game, worth trying, no actual cost, fun, yay.  However, I think there’s a bit of missed opportunity here for revenue.  I think one of the biggest advantages F2P has is that it can reach a very large group of people, especially in lower levels.  While most companies try to greed you out of your money through sleazy schemes in the cash shops, they could just as easily supplement that income via advertising.  Ok, I don’t mean having a [+3 Hilfiger Polo of Might] or mages conjuring mana recovering Mt. Dew., but rather actual ads in game (WHERE APPLICABLE!).  Look at CO, it’s set in a modern enough city with tons of billboards for fake products and places… but what if they replaced it with Coke or Pepsi or anything else?  We get enough of it in our everyday lives, so a little more in fantasy land shouldn’t be that much more obnoxious.  Besides, they could allow subscribers to play the game ad free.  I’m not totally opposed to ads if it means being able to play for free, though I think it would be situational for which games would be ok and which would totally break the immersion.  Just throwing that out there… If it means the end of the cash shops if I just have to have ads in my face… I’d choose the ads.

Ok ok… back on topic… So the really cool feature of CO is that you can make just about kind of character you can imagine!  Though I must admit, it’s kinda sad that I tend to spend more time designing my characters than actually playing!  Yeah, I’m not even going to tell you guys how long I spent on my Fallout 3 guy…  Anyways!  In my adventures for the last week or so, I’ve discovered a strange consistency.  It seems that most people tend to make a lot of super duper looking crime fighters, a few name brand remakes, and even less outlandish monstrosities.  Then there’s me.  For whatever reason, given the option of customizing my character, in ANY GAME, I will make a little version of myself!  That’s right!  I made Super Shawn!  So I can’t help but wonder what you good folks do…

ALSO!
I made some skins of my characters… just download them to your Screenshots folder of your Champions Online install, then Load via the Tailor or creation screen.  Don’t change the file name… think it needs it to be the same.  Find more in my SWAG page at the top of the screen!!