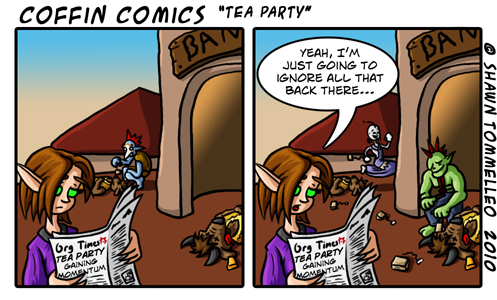 Perhaps a little bit of a flashback with this week’s mini, but I figured it was appropriate given the subject.  See, down here in good ol Florida, all I hear about is Tea Party this and Tea Party that… And while I’m happy we have a governor election with a 3rd party and even a non-affiliate, both which have a fighting chance… I’m also taken back by the controversy it’s caused.  Of course, only in Florida would this happen.  It’s a strange place.  But the short of it is there’s a national Tea Party and a Florida Tea Party which got its name on the ballot and the national one is not happy about it and the two sides are fighting and suing and feuding.  So it’s a mess.  Like always.  But such is the teen drama that is politics.

(Read more on the subject)

So gang, this all comes around to an interesting thought…  Back in the old wowclassic brochure it said you could get “dishonorable kills” which would earn you negative rep!  I, of course, had the great idea that my Dwarf hunter would get kicked out of the Alliance and join the Horde.  Well that didn’t go very far… bout as far as my Dwarf mage… but still… I always wondered… oh, right!  Anyways!  So here’s the poll of the week!  XD

(btw, this weeks cameos include Olord, Mikeoxbig, and extra points if you guess the tauren)