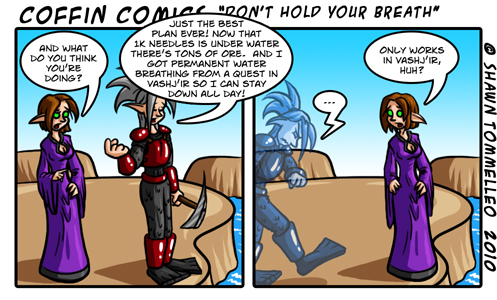 Yes… because I really did try to do this too!  For those who have not been yet, you get a quest early on in Vashj’ir that gives you under water breathing.  It doesn’t even show up in your spell book, but you get the buff for [sea legs] or something like that, making you breath under water and run fast on the bottom.  Of course… one would think you could just use it anywhere, even along the coasts of Azeroth… cause you know, it’s the same ocean and all… but alas, the spell seems to only work in one place.

To be honest though, I really like the new underwater area visually, but HATED questing there!  Swim here, swim there, your turtle goes slower than the sea horse that you get from a quest, and instead of only worrying about mobs on the ground, they’re surrounding you completely.  What’s worse, is the quest structure!  I finished the quests, or at least I think I did and they just stop!  I swam around and around for a follow up or any indication on where to go next, but I couldn’t find anything… So I hoped a portal to Hyjal.  I hear it’s a bit better up there quest-wise.

Panel 1:
Sindy: And what do you think you're doing?
Nith: Just the best plan ever! Now that Thousand Needles is under water, there is tons of ore. And I got permanent water breathing from a quest in Vashj'ir so I can stay down all day!
Panel 2:
Sindy: Only works in Vashj'ir huh?
Nith: ...
└ Tags: Nith, Sindella