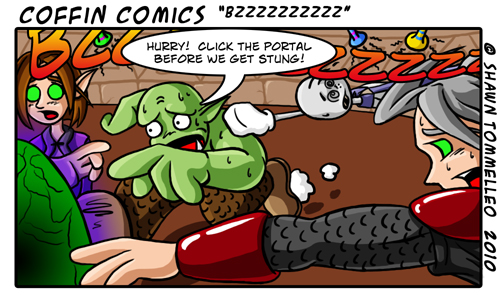 Well, after watching some World Cup games, I’ve developed a distinct hatred for the Vuvuzelas!  They are like kazoos on steroids!  All you hear in the background is a horrible buzzing sound! Almost like a horrifying swarm of insects.

Sadly, the plague has spread to the States!!!  I was watching a Rays vs Marlins game a week or so ago and OMG!  They were handing those things out to all the fans…  Everybody (umpires, players, even commentators) were complaining!

I hope these don’t catch on here… uhg…

Edit:  Ok… so great minds think alike!  I just found 2 other comics that did vuvuzelas this past week too!  LOL!  Guess it drives everybody insane huh?  Check em out, pretty good stuff!!
AFR: #82 The Origins of Garrosh Hellscream
MMOFC: World of Warcup

Panel 1: Loud buzzing in the background at an arena
Gurr: Hurry! Click the portal before we get stung!
└ Tags: Coffin, Gurr, Nith, Sindella