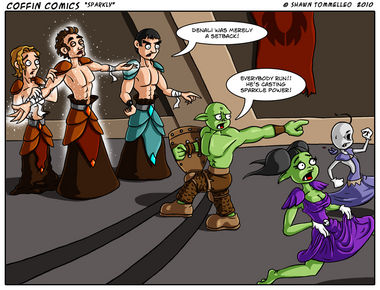 For those who don’t know, this is the Blood Prince Council in Icecrown Citadel.  Three pretty tough bosses that are fairly difficult to fight (eh, for me anyways).   Anyways, one of the bosses, Prince Taldaram, uses Glittering Sparks attack, which is basically fanciful sparklies.  At one point in the fight, Prince Valanar will announce “Naxxanar was merely a setback!”, which is referenced here by Emmett, since Denali didn’t go over so well for them…

ALSO!!!!
My buddy over at TormentOfTheWeek.com did a cool comic this last week featuring many characters from various WoW webcomics (including Coffin!).  So head on over there and take a look!  >D 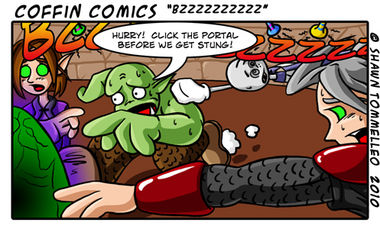 Well, after watching some World Cup games, I’ve developed a distinct hatred for the Vuvuzelas!  They are like kazoos on steroids!  All you hear in the background is a horrible buzzing sound! Almost like a horrifying swarm of insects.

Sadly, the plague has spread to the States!!!  I was watching a Rays vs Marlins game a week or so ago and OMG!  They were handing those things out to all the fans…  Everybody (umpires, players, even commentators) were complaining!

I hope these don’t catch on here… uhg…

Edit:  Ok… so great minds think alike!  I just found 2 other comics that did vuvuzelas this past week too!  LOL!  Guess it drives everybody insane huh?  Check em out, pretty good stuff!!
AFR: #82 The Origins of Garrosh Hellscream
MMOFC: World of Warcup

Panel 1: Loud buzzing in the background at an arena
Gurr: Hurry! Click the portal before we get stung!
└ Tags: Coffin, Gurr, Nith, Sindella
5 Comments 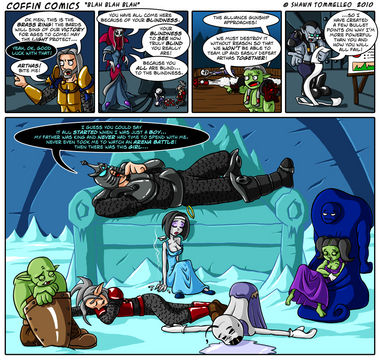 Before Icecrown Citadel, I thought the Argent Tournament intro speech was bad!  At least you can skip that one…  As for the rest of these; I do enjoy the lore associated with them, however, once I heard the speech, I’d rather just get on with the fighting every time after that.  And when you get right down to it… it all turns into some kind of weird soap opera type thing.  They all have some weird bizarre problem that they are stubbornly passionate about and, of course, will go on to tell you all about it…

Seriously… if I was a boss and some punks broke into my lair, I wouldn’t rattle on with some long winded speeches about this and that and boo hoo hoo… No!  I’d lay the smack down!  It all reminds me of the old batman/superman comics where the badguy will tell them the whole plan before they die a slow and unmoderated death… to which they escape and save the day.  Come on villains!  Get with it!  Just squish them and move on… cause they’re probably just buffing up while you’re giving them your life story.

For those not yet to ICC, here’s an excellent site (except for the last one) with their real speeches (spoilers… I guess): ICC Intro, Lady Deathwhisper, Gunship Battle, Saurfang, and Lich King.

Panel 1: At the entrance of Icecrown Citadel
Tirion Fordring: Ok men, this is the brass ring! The bards will sing of our victory for ages to come! May the light protect...
Lich King Interupts: Yeah, ok, good luck with that!
Tirion Fordring To Lich King: ARTHAS! Bite me!
Panel 2: Lady Deathwhisper's Chamber
Lady Deathwhisper: You have all come here because of your blindness. Your blindness to see how truly blind you really are! Because you all are blind... to the blindness.
Panel 3: At the Gunship Battle
High Overlord Saurfang: The Alliance gunship approaches! We must destroy it without reason so that we won't be able to team up and easily defeat Arthas together!
Panel 4: At the gate to the Upper Spire of Icecrown Citadel
Deathbringer Saurfang: ...So I have created a few bullet points on why I'm more powerful and how you will all fail!
Panel 5: At the Lich King's Throne
Lich King: I guess you could say it all started when I was just a boy... My fater was king and never had time to spend with me. Never even took me to watch an arena battle! Then there was this girl...
└ Tags: Coffin, Ell, Girl, Gurr, Nith
29 Comments 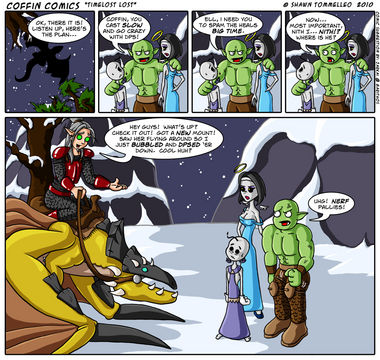 Funny story… While making this comic, as I do with most, I logged into WoWland to get some ideas for the scenery and whatnot.  Flew all around Storm Peaks taking screenshots of various locations.  Well, this all happened last tuesday, during the big 24hr maintenance on my (as well as many others’) server.  So there I was, checking out the Timelost Protodrake’s flightpath, when I see it!  Right there on the edge of my max distance!  Sadly… by the time I figured it out and mounted up I was too late… Timelost had disappeared into the sunset…  How very sad…  >(

This comic is dedicated to all those out there who try to do things by the book, follow the encounter strategies, only to have some loladin* run up and laugh at your group as he solo’s the evil boss.  Heck, I remember a time when the quest “Threat From Above” required 3 people at least… now you got pallies and druids and most of everyone else just downing that guy without ever losing more than a quarter of their hp!  Humbug I say!

*My main is a pally so uh… so in case you’re reading this, don’t actually nerf pallies, Blizz!  was just joking…. DONT DO IT!!!  XO

Panel 1: Timelost Protodrake flies overhead
Gurr To The Group: Ok, there it is! Listen up, here's the plan...
Panel 2: Gurr is giving the group instructions
Gurr To Coffin: Coffin, you cast slow and go crazy with dps!
Panel 3:
Gurr To Ell: Ell, I need you to spam the heals big time.
Panel 4:
Gurr To Nith: Now... Most important, Nith I... Nith!? Where is he?
Panel 5: Nith arrives on a Timelost Protodrake mount
Nith To Group: Hey guys! What's up? Check it out! Got a new mount! Saw her flying around so I just bubbled and DPSed her down. Coo huh?
Gurr Self: Uhg! Nerf paladins!
└ Tags: Coffin, Ell, Gurr, Nith
35 Comments 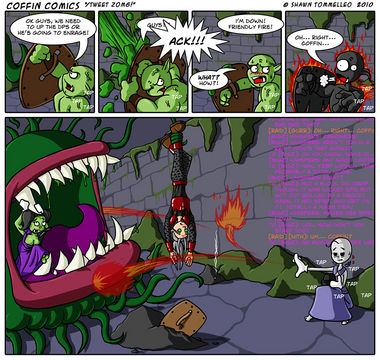 This week, I thought I’d cover the topic of “Raid Texting”.  I know many of you out there do it!  Don’t even try to deny it!  Things get a little slow, you get tired of pressing the #2 on your keyboard, so you start chatting it up.  Might start off as a whisper or two, then after a while it progresses to an all out chat-a-thon with multiple chat tabs going with a dozen people… and that’s when it happens… you don’t even know where you are because you put the auto-follow on the priest and everyone around you is dead and angry.

Raid Texting is the leading cause of wipes!  So please, save the chitchat until after the raid!

In related news… Coffin Comics is now on Twitter! (lol, c wut i did ther?)
http://Twitter.com/Coffinshaker

Least he had chicken?  Sometimes, just for fun, my little Mage likes to go fisticuffs style… mostly just miss, but sometimes he’ll land a right cross to the chin for a whopping 1 damage (critical of course).

Now then… With the recent changes announced to the Paladin class, I knew I had to make this comic asap (you know, before everybody forgets about the good times).

So, as a Paladin with buff QQs as my anger management trigger, I have definitely passed out Might to every caster in a raid when bombarded with a million whispers for Wisdom or Kings.  Seriously, after a wipe or when getting set up, wait for everyone to get in before begging for buffs.  Because 10 seconds later, someone else will waltz into the instance and be like “Hey gang, how bout some buffs?”  XD

Heaven forbid you put the wrong buff, Wisdom or Might (or even Kings) on the wrong person!  That’s grounds for all out war!  But them crafty minions working at Blizzard decided to combine them, specifically, to curb my buff rage issues. Heh.  >)

For the record, this is a reference to Legend of the Seeker.  I got totally addicted to that show after practicing my insomnia skills on Sundays… it was like, Xena but with more slow motion.  If you are new to the show, or will be soon, the first season was all about the slow-mo jump attacks!  I’d love to recommend making a drinking game of it, but I don’t want to be responsible for any alcohol poisoning incidents.

Panel 1: Nith is buffing the raid with Might
Panel 2: Nith accidentally buffs Coffin with Might
Panel 3: Coffin feels the power while Nith realizes what he did
Panel 4: Coffin goes mad with power and Nith tries to make his escape
Panel 5: Coffin imagines being Richard in a scene similar to Legend of the Seeker
Panel 6: Coffin is in the background attacking a dragon (Onyxia) who is Missing and Dodging his attacks
Girl To Ell: Did... He just run...
Ell To Girl: Yup...
Panel 7: Awkward moment
Panel 8: Coffin runs for it
Girl To Ell: Race you to the exit?
Ell To Girl: Yup...
Panel 9: Coffin still running from dragon
└ Tags: Coffin, Ell, Girl, Gurr, Nith
9 Comments 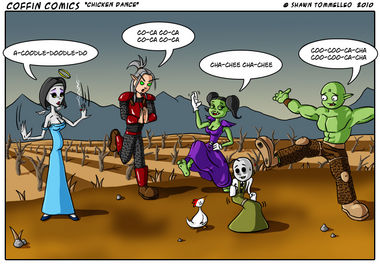 I don’t think they’ve ever seen a real chicken…

Ah yes, the chicken dance… This little quest brought me many fond memories of clucking like an idiot in Westfall. Then you have the Horde… flapping their arms, dancing around, all in a vain attempt to impress a little bird that would inevitably side with the Alliance anyways… traitorous fowl!* Why, I remember back in WoW-Classic, there would be dozens of Allies clucking about trying to get this pet. What a sight!

I know this week is a little bit of an obscure reference, but you all should really watch some episodes of Arrested Development. Another great show cut short by the executive suits… At least there’s a movie coming…

*Of course the good people at Blizzard patched this not too long ago, allowing the Horde to get this pet as well! >D

“Lets play a round of my favorite game! Frogger Teabaggin! All you have to do is go into the Construct Quarter of Naxxramas, wait for the slimes to kill one of your buddies, then run up between the slimes and give em a good ol’ teabag!  Don’t die though, cause then you’ll lose.”

Edit:  Ok, it has been pointed out to me that I’m doing this wrong… no wonder they’ve all been laughing at me…  ~>( 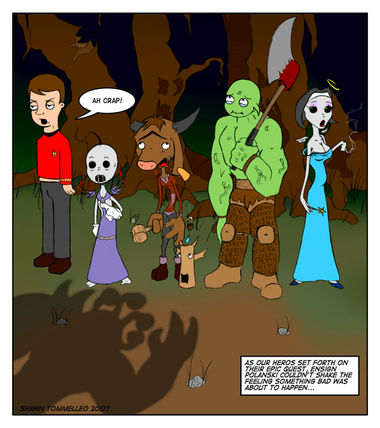 It’s always sad, isn’t it?  You get your tank, your healer, your dps, and the guy in the red shirt shows up and you just know he’s the first to go.  Poor cast extras… While I’m sure those that play WoW are well aware of what this is about, for the rest of yall… it’s a Star Trek reference.  Enjoy.