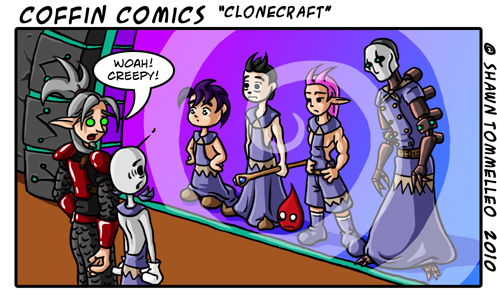 So should we call WoW “universe A” or “The Fighting Mongooses“?

Truth be told, I’ve tried out a few Free To Play games.  Some are interesting, some are horrifying, and some much better than others.  They all do have something in common… they’re all pretty much WoW Jr.  XD

Ok, that’s not fair really.  I say that because WoW was my first multiplayer rpg game.  But when you look at them… and play them… they all start to feel like a certain game we all know and love.  Either intentional or otherwise, the UI is fairly intuitive and I suppose there isn’t a whole lot of room for variation.

The real difference… it’s just not WoW!  Yeah… that was deep, I know.  But what I mean is that the classes and mechanics, graphics and technical stuff, and of course, the money aspect are just more polished in WoW.  Sure they are free to play, but each has its own way of zapping your wallets.  Mostly using “Death Penalties” such as Allods where you have to purchase items to help reduce how long you stay dead or Grand Fantasia where your equipment gets it’s total durability reduced every time you repair and you must buy a hammer to fix it.  Then there are others that sell “in game currency” for actual currency… which is a whole other issue I wont get into.

Anyways, featured in this Mini are the games Luna Online, Grand Fantasia, Fiesta, and Allods… (links go to mmohut.com, which is a review site.  figured yall would like the info) in that order.  These are all my mage-like characters (can you guess what I named them?)

Like I said, there’s not substitute for the real deal.  WoW is still the BEST so don’t think I’m suggesting otherwise.  But if servers are down or I want to play with some friends that don’t have WoW, then I’d say Grand Fantasia is second best with Allods as the next runner up.

If you like playing with clones of the same 6 people then play Fiesta (which also installed a CREEPY bit of software. I don’t know what it does, but I definitely don’t like it running and sending unknown information to unknown peoples).  If you like walking into a city and all you see are chat bubbles of people trying to sell junk, then play Luna (omg, it was fine up until that point! It’s completely unplayable in cities!).