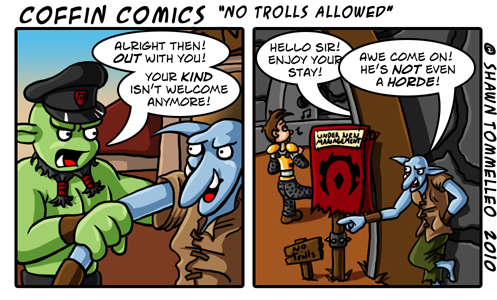 I don’t know how to address this without spoiling too much, but there’s a bit of a change coming in Cata beyond just the terrain…  I’m sure those of you who follow the lore already know the change so there’s nothing spoiled, but in case you want to get a sneak peek at what’s to come, LOOK HERE.

Now, for the RL tie in here.  As you know, these Minis have a way of taking current issues and even though I like to poke fun, there’s a bit of seriousness behind it.  I would read THIS article first.  It basically says Arizona police can stop you if you “look” like an illegal immigrant and if you can’t prove you’re a citizen, then you’re out.  To be fair, I fully understand the issue they are trying to fix.  There are certain problems with having a large influx of illegal immigrants.

HOWEVER, I’m not a fan of the Bill.  You see… aside from the type of profiling you see on Criminal Minds to catch “a” criminal, when you start doing broad based profiling, you start getting into trouble.  We’ve seen how profiling can go to bad places in the past.  Shall I remind everybody of McCarthyism?  The Japanese-Americans in WWII?  Hibernophobia?  And of course the minority profiling in the 80s and 90s specifically (scroll down to “driving while black” but the whole thing is a pretty enlightening read)?

This is not ok.  This is something that can be corrupted very quickly.  And if it were up to me, I’d let the people here illegally become citizens.  But I just don’t have a good feeling about this kind of profiling.

So I implore you all to go research both sides and make your own opinions on the subject.

I apologize for getting kinda heavy with this comic, but when I saw the article, I thought it would be good to spread some awareness of the topic.  I like being able to incorporate some current events into the Minis especially when they parallel Wowland, so I hope I’ve been able to amuse and inform my readers.

Panel 1: Orc cop is throwing a Troll out of Orgrimmar
Sign: Under New Management
Orc: Alright then! Out with you! Your kind isn't welcome anymore!
Panel 2: Outside of Orgrimmar, the Troll hangs around while a Human walks into the city
Orc to Human: Hello Sir! Enjoy your stay!
Troll: Awe come on! He's not even a Horde!