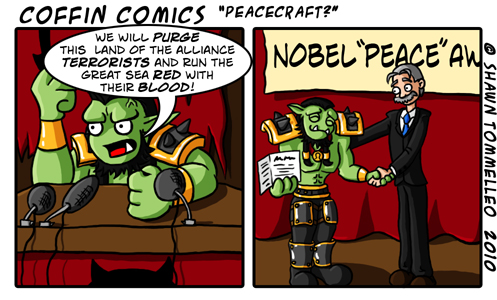 Wow, this is an old one I completely forgot about! XD

Anyways, probably nobody remembers this by now, but the pres got the Nobel Prize right off the bat and a lot of people were really really confused by it (some were upset, some were supportive, but I think most people just didn’t really care). Cause you know, he like JUST got into office and all and there was still, uh, war going?

But yeah, this is obviously taken waaaaaaaaaay over to the extreme side for the funny. You know, how weird would it be for say… Garrosh to get a Nobel as soon as he gets into office? Now Varok, I could see him getting one cause he pretty much despises war by now. And the guy who invented the chicken-ray gun… How could he not get one?! >D

I’m sure you can get tons of info on it via the googles… but here’s a link for more info: Read more.

Also! The election poll will be closing soon! So if you haven’t already…
VOTE FOR THE NEXT HORDE LEADER NOW!!

Now, since we are on the subject of war and peace and all the stuff inbetween…

Panel 1: Thrall at some press conference
Thrall: We will purge this land of the Alliance terrorists and run the Great Sea red with their blood!
Panel 2: Thrall accepting the Nobel "Peace" Award