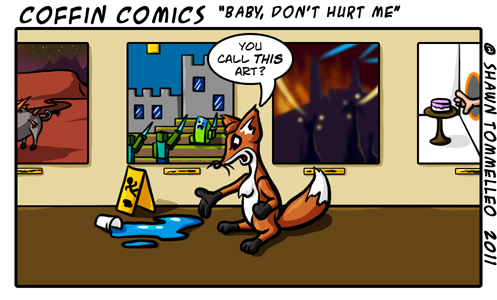 Right, what is it?  Can you definite it simply by saying “anything created through skill or vision by human ‘hands’ is art”?  Or is it more complex?  Something that conveys a message or feeling?  Are there levels of art?  What defines valuation of one above the other?  Does a painting of a garden landscape hold more artistic value than the actual creation and maintenance of that gardenscape?  Finally, the big question, are video games art?

Well folks, it’s simple.  Art is art is art is art… it’s art all the way down!  Any creation by the human (and/or animal) mind in which it brings something tangible (includes virtual)  into being is art.  And its success and value “can” be measured  by the mastery of basic principles incorporated within that work.  There.  </thread>

Yet, this idea, despite its grand simplicity, is the subject of vicious debate.  Folks, art is everywhere.  It is what drives the formation of all things around you.  This art, in no loss of the spirit of its meaning, is very much alive in the world of interactive media.  Simply put, VIDEO GAMES ARE ART.  I just can’t comprehend how this isn’t a given.  It’s like people debating that the oceans aren’t made of water.

Ok, but why is this important?  Well, recently the NEA (National Endowment for the Arts) has classified interactive media as an art form, thus allowing developers to tap into public grants to help them produce more creative projects.  Ah, and there we are.  The root of the problem.  Money!  And the people who don’t want others to have it.

So then THIS happened (follow the link to read the whole article) on Fox News.  In typical fashion, they stonewalled the side of logic with some sort of insane babble that makes NO sense.  You… just have to watch the video, it’ll make you sick.  TL;DR, they used Call of Duty as a reference for the kind of games this funding would go to, and while it’s still art and apt, it’s not the type of game the money will go towards.  It’s games like Minecraft or Love or Portal or indie games and such.  These things that are absolute poetry in their elegance are what they are trying to promote.  (and while COD being a valid candidate is not the discussion here, and being a poor example for “interactive media” as a whole, I still think it can be claimed as art, so… yeah… eat it Fox!)

My point here folks, is that they failed to see the forest through the  trees.  They see only the big controversial games that they love to spew the rhetoric of “violent games = serial killers”, (again, another debate for another day, but they don’t… ever.) and focus only on those as representatives for the entire media.  That is completely unfair.  It’s like saying all film is bad and has no artistic value because of Time Cop.

And I propose a dare… I dare Fox News and affiliates.  I dare their supporters and nay sayers of interactive media as art.  I dare them to play, nay, to just watch THIS VIDEO of the game Love and still hold on to their view that video games are not art.  Because if that game doesn’t move you in at least the slightest to agree that games are art, then I’m sorry, but you just have no soul.

Well, what says you?

Ps… Looks like some things are getting a bit congested in my schedule, so no big comic friday.  But uh, I’ll have a mini ready for you.  (in theory)  I’ll let you all know what’s going on with my side project, but it’s something I’m trying to get ready for in this next convention in July… so yeah… sry bout that in advance.