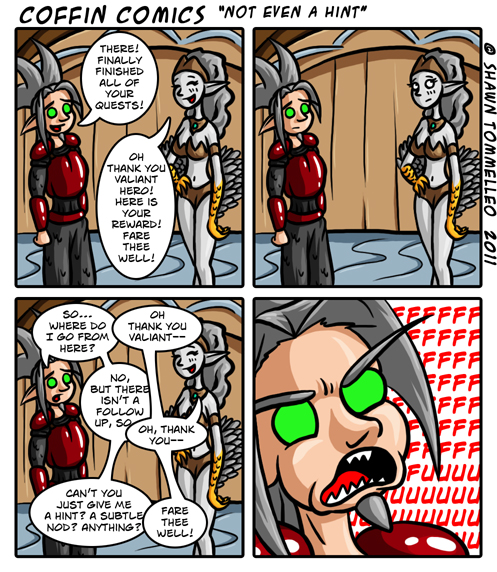 Not Even A Hint

Ok, this keeps happening to me!  First in Vashj’ir then Mt.Hyjal.  I’d be questin questin questin… then I get to just 1 quest left and then nothing.  No hints, no ! marks, no casual conversation about where to go next… nothing.  I’d be stuck with no clue where I was supposed to go!  I hadn’t finished all the quests according to the achievements, so they’re there somewhere!

This is one of my bigger pet peeves in Cata.  They did such a good job in WOTLK with quests and how they flow from one area to another, but so far I’ve been disappointed with the Cata flow.  There should be no reason you’d get stuck with no idea where to go after.

Well, who knows… maybe I’m the only one.  XO

PS!  Coffin and the gang had a cool cameo over on The Black Dragon Chronicles!  Check it out!  See if you can spot the other wowwebcomic peeps too!