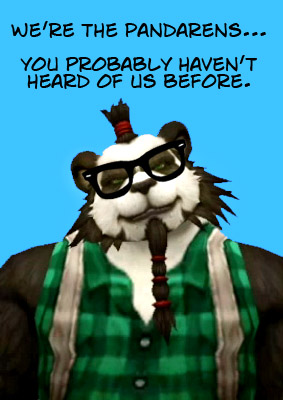 Well… it finally happened!  After a little over half a decade of wowcrafts, we finally got Pandarens!  If you haven’t heard of them, that’s ok, they’ve been a pretty secluded race and only seen through obscure references.  But yeah, looks like we get to start things off in a beautifully asian looking countryside, get the new monk class (which looks pretty BA btw), and at level 10, we choose a side!

Now… this is something totally awesome to me!  Ever since I heard about wowlands, I wanted to have a Horde Dwarf!  Don’t ask why… it’s just cool.  And according to the manual, you could lose rep with your faction by doing dishonorable kills and gain rep with quests… so back in my noob days (and I was quite the noob… didn’t know they had dungeons until lvl 50ish) I figured I could defect from the Alliance and join the Horde!  Of course, that couldn’t happen… but a wee dwarf can dream…

But, with this precedent of choosing a faction independent of the race seems very interesting to me.  See, classically the factions were pretty darn racist; you know, humans and orcs don’t mix.  But over the years, we’ve met many neutral factions that are made up all kinds of races.  And they get along just fine!  Now, at it’s basics, I don’t see the   Horde vs Alliance thing to be mainly about race, but rather the use of resources (just like most wars).  So my thing is this… if the pandapeoples can be either, and it’s not confusing to the general public cause the enemy will just have a red name and your buds a green, then why is it so taboo for us to together?  Why can’t we expatriate ourselves from our current faction to the other?  Why can’t my dwarf be a Horde?!?! So what say you, good people of the interwebs?