That’s right folks!  Another episode of the Amazing Adventures of Steve & Terry!  (working title)  Actually, been getting some good responses about these two, so I guess I should make it a bit of an ongoing thing huh?

For those not in the know, the 3d guy is Steve from Minecraft and the 2d one is *Terry from Terraria (btw, terraria doesn’t have a mascot, so I just kinda made him up to fit).  Since both games are somewhat similar, I figured they should be friends.  >)

So yeah, about this comic… The thing I love about Terraria and hate about Minecraft is that in MC, you have such a limited selection of armor and weapons that the whole combat end just feels a bit lacking.  I mean, a crafting game SHOULD have tons of things to, you know, craft; so having a just 4 reskins of the same blocky armor doesn’t yield much in the way of immersion.  I know, Terraria had a larger team to work with and MC started as more of a building game than a combat one, but still, the direction it’s going now, it NEEDS to have a major overhaul of the system.  What I’d like to see is some weapon slots on the inventory and make items persistent and hard to obtain… meaning, equipped armor/weapons do not disappear on death and there should be multiple tiers of crafting to make complex gear with specific abilities and improvements.

But ya know, I guess it goes back to the argument of “well, if ya don’t like it, use a mod”.  And that’s a very fine point!  Because MC is like mod city!  I’ve just gotten into playing with a few (ok… I’ve got like two dozen going) mods and they definitely improve the gameplay!  The only thing I don’t like is the lack of actual support for the mods… like an “official” centralized system for creation and installation.  As it stands now, if 2 mods don’t like eachother, then everything breaks and the barrier to entry for installation is pretty high… or maybe I’m just a little special, but it’s seriously a pain to get them running correctly!  If they could fix MC to cycle through mods as easy as it is to go through maps in Little Big Planet, then I could see the sales of this game just explode!  Eh, that’s my theory anyways.  Actually, I’m interested in making them now, so maybe I’ll tinker with some ideas in my spare time.  Hmm… maybe after MC comes out of beta, I’ll put together a modpack with my favorite picks! 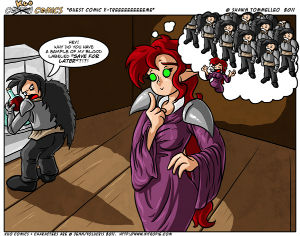 Did a little guest work over at Kuo Comics, so head out there and check it out!