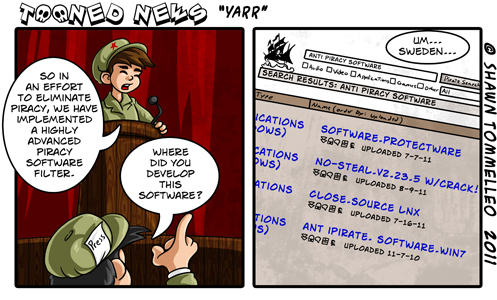 Well folks, it looks like Hell has officially frozen over!  Now, I like to lovingly pick on China a bit, but I’m actually pretty excited for them.  Recently, the powers that be released a statement that they will be cracking down on pirated software, movies, music and knocked-off name brand products.  This is huge!  I mean, the joke is that China’s main export is bootleg dvds, but having an official policy to abolish it is an amazing step in the right direction!  Maybe it’s because of foreign pressure or just the natural evolution of a nation, but it looks like a good move for the country.  I guess this is just the beginning of a long line of political patches to hotfix some of the more prolific problems effecting many of the other countries (such as the ban on gold farming… err… attempted anyways).

So yeah, exciting stuff!  Hopefully we can see some good coming out of this for all those IP holders who lose tons of money to pirating and counterfeiting.  Then again, this might have some negative impacts due to the outlawing of the processes and thus, unemploying a potentially great number of people.  Guess we’ll have to wait and see what happens, but if it all works out for the employees, then this will be a great move for the country in its growth and relation to it’s buddies.  But I hope they don’t fix too many problems… gotta leave me a little something to make fun of!  XD

Also:
Still open for anyone wanting to submit either some fanart or guest comics for Coffin Comics / Tooned News!  Send me a poke on the Contact Page if you’re interested!