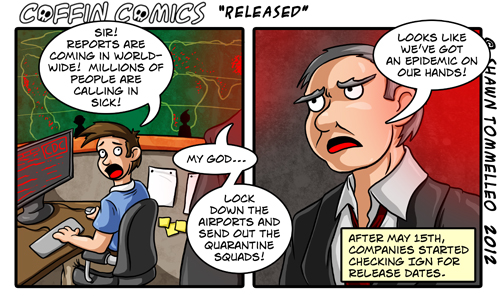 You know, I wonder what the statistic is on sick days called in due to video game releases…  Something tells me it’s high based on some of the posts on the Diablo 3 forums.

So lets talk about that for a second… Anyone who bought or tried the Diablo 3 game for the week of May 15th can tell you that if you took the day off, you probably wasted your time.  Seems like Blizzard had an unexpectedly bad launch for their much anticipated game.  Twelve years in the making and that adds up to a lot of frothy mouthed consumers dieing to jump right in.  Problem is, Blizz decided to make this game online.  Granted there’s quite a bit of multiplayer elements to it (though not an MMO), the game seems to be pretty solo focused.  Well, to me anyways.  I think the issue was with security, especially with drops and the real money auction house aspect.  I can understand that, but I’d rather it be run more like Steam, where there’s an offline mode for times of crisis… such as this.  From day one it’s been massive lag, servers down, and Anu help you if you tried playing Hardcore mode (the one that if you die it deletes your character).  While most of the kinks have been ironed out, except for, you know, lag issues, it seems to be one of the worst case scenarios for a launch.  But I guess that’s to be expected with PC launches.  They almost always have some sort of ridiculous game breaking problem.  So even though it was pretty bad, I’d also argue that it’s not something new.  Comes with the territory ya know.  Still, it’s little consolation for anybody expecting to sit down and have a nice evening with something they just purchased.  It’s kinda like buying a movie from the “on demand” service and your cable going out.  Sure, not the end of the world and you’ll probably be able to pick it up and watch later, but it just puts a damper on your night.  Ah well, better luck next time Blizz.

In anycase, I’d like to know the stats on this calling out thing!