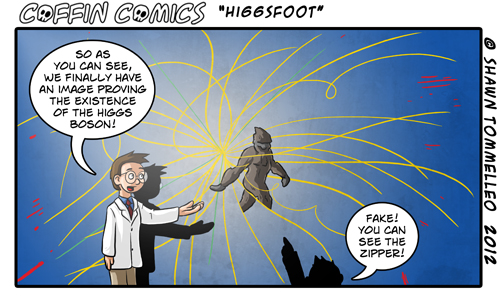 Happy day one and all!  On July the 4th, 2012, the good folks at CERN officially announced that they found the long sought after Higgs particle!  This is, of course, worded they found a new particle with characteristics in line with the theoretical projections of the particle with a 5 sigma confidence.  While that all may sound wishy washy, it’s still like saying they’re 99.9999426697% sure it’s the Higgs Boson, which is pretty darn sure.  Of course, there will be some time before we will know for sure what’s going on under the hood, but for the most part, this is a huge discovery!

Why?  Well, the Higgs Boson was the particle theorized to be associated with mass!  (I think I explained this before, but here’s a quick run down)  Every one of the 4 forces has an associated particle, so like electromagnetic is the photon, gravity is the graviton, etc.  But the more we tried to understand how things worked, there was this little hole where mass should be.  We couldn’t figure out why things are heavy.  What makes one thing more massive than another?  Sure, you can say size, but why would size matter?  What mechanical device makes something that is bulkier have more mass?  Well, Old Man Higgs came up with a cleaver theory that the universe is saturated in a giant field (Higgs Field) and as we know, every field has its own particle.  (field particles are like things that can blip in and out of existence, meaning, we can only know the probability of where they might be, but not where they are at all times… it’s a complicated thing… check the youtubes for some info)

So yeah, the theory said that the universe is filled with this field… and this field is made up of little particles (Higgs Bosons).  So think of it like the universe is submerged in a giant ocean.  Think of the ocean as the field and the water molecules as the bosons.  Now, when a little fish swims around, it can dart through the water with the greatest of ease!  Because it’s so small, it can zip through the water molecules because there’s less resistance!  We would say that little fish had low mass.  A big honkin’ whale has to push much more water around to go the same distance, and thus, goes slower.  We’d say this has a lot of mass.  Seems easy enough, but we had to build a massively expensive machine to make enough energy to bring this little particle into existence to prove that, well, it existed!

So there you go!  Some majorly cool science just happened in your lifetime!  It’s like our generation’s discovery of gravity.

Also, I’d really like to stress this now… There is still a LOT of work to do now to figure out what all this means for science AND we might some day find this wasn’t the particles we were looking for.  But, that said, it does seem pretty legit and I am absolutely amazed at the ability of the Human collective to construct the most complicated experiment in the history of the world and provide striking evidence for the very thing it sought out to test.  Truly amazing work peoples!

So now that we got that crossed off our list, I wonder what the next big thing to discover will be!