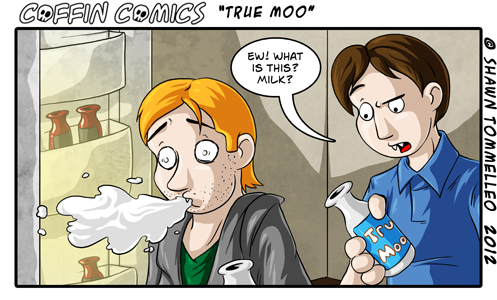 There’s nothing worse when rummaging through the old fridge for a drink and accidentally grab the wrong thing!  Like going for some OJ and taking a swig of V8!  Bleh!

I keep seeing this “TruMoo” stuff and my first thoughts are always “huh, is this synthetic milk for vampire cows?”  For healthy bones and fangs!

So… while on the topic of vampers, why don’t we discuss the possibility of their existence.  It seems that ever since there have been Humans scurrying about, there have been stories of vampires!  They are amongst the oldest of folklores and regardless of their origin, they share many many similarities.  Maybe it’s a “morphic” kind of thing, or just great minds thinking alike, but the fact that these creatures attack humans for their blood, especially in many places where the only closest thing in common is a mosquito, is pretty amazing.  You would think that if people all lived separately and isolated, they would come up with different folklore monsters, but it seems certain ones are just hardwired into our collective consciousness.

That said, the science needed to make it work can only be stretched so thin.  Like our talk about zombies, there are plenty of things to make a similar effect to the whole “living dead” act.  Mortality is just a function of biology.  There’s no real reason for mortality, other than the need for evolution, and advances in that direction are taking great strides.  But what about the whole blood thing?  Well…  that’s a difficult one to explain away.  The Elder Scrolls folks had an interesting take based on a cursory study by David Dolphin which explained it as a means to treat porphyria by increasing the absorption of some enzyme through the stomach lining (thus in Elder Scrolls you contract porphyric haemophilia).  But again, it’s a stretch.  Human blood I guess has some fun stuff in it and some suggest that it is this “stuff” specifically that the vampires lack and must take in, such as PCDHY proteins, but still…

So my take… um… other than some mystical essence or a specific protein/enzyme deficiency, I have a hard time rationalizing it beyond something more akin to zombism.  Which is totally fine, I mean, you could classify them together, but to me they seem more alike than separate.  Take transmission for instance; via bite (aka saliva) or exchange of blood (blood to blood contact), which are very similar to the way zombism is transmitted (aka, similar in effect to rabies).  Or improper burials which may be something like an environmental parasite, possibly insecta or fungal.  Or the more fun ones say a life of extreme hedonism, which could imply a number of things including sexual transmission and could have ties to something like syphilis which could deteriorate the brain in later stages and cause aggressive behavior or mutation of herpes, which is known to latch onto nerve cells.  Immortality is easy… just a few tweeks to the body chemistry and gene structures and there you go, cell replication and repair issues solved.  (ok, doing this practically is hard, but in theory a disease could cause an effect similar to that.)  Sensitivity to the sun can be caused by a whole host of things, though this is more of a recent incarnation of vampire lore.  Garlic is the same way, I mean some is fine but too much and nobody want’s any of that stink!  Same with aversion to christian relics, I mean, if you contracted this via hedonistic ways, no one wants to be nagged about it…  But blood?  Well, again, if the production process in the body is somehow shutdown for whatever it is in the blood, then maybe a few nibbles is all you need!  So there you have it, vampirism!  Just an offshoot of zombism!

Now what say you?