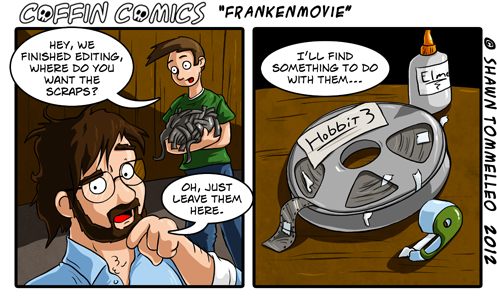 Yup… so the duo movie series is getting a little addition!  From the reports I’ve been seeing, they kind of padded the series with some extra footage to extend it into 3 movies.  Now, while this is the director’s call, I wonder how effective and maybe how ethical it is to sacrifice creative control for monetary gain.  I mean, obviously if you can water down your drinks to edge out a few more sales, that’s great for your income!  Especially if your customers don’t know any the wiser.  But is that what we really want to do?  Sure, maybe they don’t know it’s watered down, but you’d know; and doesn’t that just chip away a  little of the soul each time?  We could argue one way or another that it’s really up to the director’s discretion on how it should be done, and maybe it works better this way artistically or for audiences that don’t want to sit through 10hr long movies… But if it’s really to pull off a triple boxset to get that last extra ticket sale, then I’m sorry but that’s the last straw from Hollywood!  We’ve seen movie after movie the last few years  that were just phoned in so studios could keep licenses or make a “safe” production, and I’m getting tired of it.  I’m tired of the padding.  I’m tired of the remakes.  I’m tired of the whole thing.  Take some risks, people!  And know where the line is between making money and making art.  You can always sell a cheap painting for a quick buck, but only those labored on for love of the art will really endure time and become masterpieces.  Maybe I’m a little cynical with the whole thing, but just hate to see it when the painter gets kicked out of the chair and the investors pick up the brush.

Anyways, we’ll see how this all turns out.  Who knows, my old jaded bones might be in for a shocker and it’s really well put together.  I know movies are made with a LOT of extra content that gets edited out.  I mean, there wouldn’t be a market for “director’s cuts” that are like 30min to an hour longer… well, except for those ones that add like 5 extra minutes and paid an additional $10 bucks for the dvd…  So maybe some of those extra little bits might make it whole… Or at least keep us all entertained by keeping in the bloopers.  >)