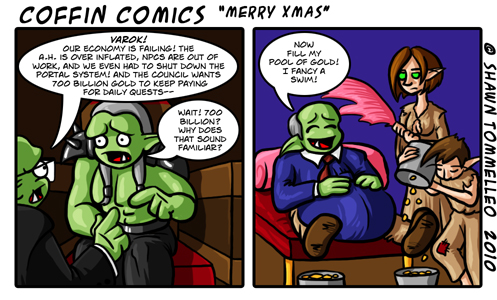 Ok, you know what?  I give up!  lol!  I’ve tried writing you all a long beautifully articulated article worthy of a high grade thesis, but my computer crashed after hours of work and killed it all.  So y’all gonna get the gist now. XD

So the long and short is earlier this month, the powers that be wanted to get rid of future unemployment benefits (extensions), then the man said “noh wai” and tried to talk to them.  They said they would give us peasants our benefits only if the top 2% ($250,000 income and higher) had tax cuts that would equal, you guessed it, $700 billion!  So basically, our country is run by cartoonish evil villains with black hats and large curly mustaches who tie our economy to the rails of an oncoming train.  Lovely huh.

Since I made this comic, things have been back and forth and I think some of the people get the extension, while others who’ve been out of work longer, such as your’s truly, are still left high and dry.  But all this has been pretty muddled in political jargon so who the heck knows what’s happening anymore.

Ok, about this point I started getting into why the economy is in bad shape and offered very concise and logical methods for how we as a people can fix it without having to result in a revolution.  Buuuuut, I’m exhausted.  If you would like to hear more let me know and I’ll try to retype it, but for now, I’ll cut it a bit short.  XP