Welcome To The Valley

Uncanny Valley that is!

Ok, let me frame this a bit.  This is in reference to the game L.A. Noire for the PS3.  Haven’t played it first hand yet, but I’ve been watching my buddy play it and it seems like a pretty ok game.  However, I have one MAJOR gripe with it, the descent into the uncanny valley.

See, LA Noire had a lot of great reviews for being one of the only games to break through the valley.  What they did was map facial expressions and movements, like much of the motion captured games before, but also integrated some weird facial overlays that helped to give it a more “realistic” feel… But… Instead of actually transcending the valley, it crashes like a meteor down to the fiery depths of uncanny hell.

So here’s where it went wrong:  The game itself has something like PS1 graphics, I mean, they’re like something awful… ok, maybe PS2 GTA:SA era, but still, there’s no excuse for this on a PS3.  It’s like, all the processing power of the machine was used up in the facial animations.  Speaking of, this is what really REALLY gets me… the facial animations look good; too good.  Juxtaposed with the stale graphics and what you have is the equivalent of a TV screen head on mannequin and calling it a person.  I mean, this is some Tron (1982) junk going on here, but at least Tron was, at it’s worst, pure awesome… this… this… Is just freakin creepy!  Just imagine if Mario had a real face in your 8bit NES game.  Yeah, it’s kinda like that. 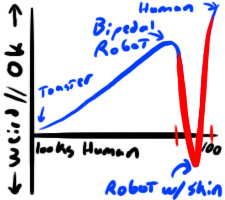 And that brings us right around to the beginning.  I’ve tossed around this terminology, “the uncanny valley”, which I kind of expect most of you gamer types to already know its meaning, but just in case you’re unfamiliar, I’ll explain here.  I won’t get into the full history here, but basically, it’s a theory by Masahiro Mori, a robotics professor, who’s study revealed that: As you move along the line from things that are 0% Human likeness (a toaster) to a full fledged Human being, an observer finds the figure to be increasingly psychologically acceptable.  Such a stuffed animal, barbie doll, bipedal (walking) robot, cartoon, etc.  However, this breaks around the 75% mark, and that’s when things take a sharp turn for the worse.  See, at some point (speaking generally), that figure no longer looks “OK” or “healthy” in our minds, rather it becomes “creepy” or “strange” or even “terrifying”.  So basically, the closer something looks to being Human, the creepier it is.  It’s a strange reaction linked with psychology and you can see its effects most drastically when playing many older games that try to be “too realistic” and end up just creeping you out… or even movies (Final Fantsy) or, most notably, robots with human looking skin.  So here you have it, the uncanny valley; resting place of all things creepy.  Actually, I plan to write up an essay about how this applies to art, which is very fascinating (well, ok, to me anyways).