Guess I did a little MineCraft comic before, but I kind of wanted to do a small series with MC and Terraria together.  Heh, in my mind, Steve and um Terry (does Terraria even have a mascot?) are friends.  I’ll get into Terraria next week, but for the sake of getting on to other things, we’ll say it’s a 2D MineCraft-esq game with similar mechanics.  But kinda not really, so more to come. 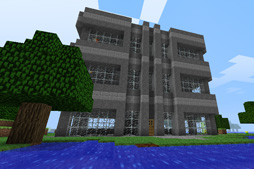 Anywho, MC is one crazy fun game!  You get to build stuff and uh, dig around… Ok, so it’s not all that deep, but it pulls out the little boy in me that yearns to dig around in the sand.  What I really like is the absolute freedom you get to basically make whatever you want.  From castles to underground bunkers, the only limit to what can be created is your own mind.  For whatever reason, my brain tends to make large office buildings as my castles!  Of course, complete with lobbies, stairwells, and overhead neon lights (err… lava anyways).

Oh, and I really love games that evolve, especially when those upgrades are free!  Granted, it’s in “beta” until November, we get lots of updates a few months apart with fun new things like new blocks or mechanics.  Where I might get bored after a while, they release another update a few months later and I’m sucked back in!  So in that way, the replay value of the game is immense!

Now… I have to toss in a few things here…  I’m not really impressed with the combat system in MC.  It seems like a secondary addition and other than being outside at night or in a cave without a proper sword, there’s not a whole lot to be scared of.  (other than those exploding [email protected]#$)  Like the comic points out, once inside your fortress, you’re totally safe.  It kind of takes away the sense of danger.  One thing Terraria has over MC is the combat system, with bosses and tons of enemies… some of which can walk into your home!  I know there’s an update out on the horizon that is supposed to address this, which I’m absolutely ecstatic for, but that doesn’t help me right now.  >)  What I’d like to see is something like a few big ol boss type creatures that can demolish your creations!  So unless you fortify your works, they’ll be torn to pieces!  And armaments too.  Either defensive blocks (comeon, let me craft an auto turret!) and/or a hefty ton more personal armors and weapons.  Again, what Terraria did with this was absolutely perfect!  Oh, and for a crafting game, it needs a LOT more things to craft.  There should just be hundreds of things to make.

Otherwise…  Crazy awesome fun to be had.  If you’re not playing it at this very minute, then you’re not living life to the fullest!  Ok, that’s an overstatement, but it’s still a great little game to pick up for not a whole lot of dough.

ps…  if you play the Minecrafts, I got some skins you can use.