Well, we’re going to try something new here!  I’m going to attempt to do a Monday Mini comic!  Just for the heck of it.  These will be little two panellers.  They’re not really part of the official “canon”, but are just bits of funniness rolling around my head that don’t quite fit anywhere else.

So to kick things off, I thought I’d touch base on the nice big slick of oil growing in the middle of the gulf…  It kind of reminds me of Humpty Dumpty, you know all of the King’s horses and men epically fail at fixing things?  Good job BP at destroying our environment.  And good luck to everyone on the Gulf Coast! (including me)  Hopefully things get cleaned up before even more ecosystems get ruined.  ~>(

Just A Little Link
Panel 1: Sindella and Nith are in Org
Sindella To Nith: You hear about this? The oil spill in the Great Sea is getting worse and nothing is being done to stop it!
Nith To Sindella: Oh I know! It's horrible! I just wonder what the longterm repercussions will be...
Panel 2: Deathwing covered in oil in the middle of the Great Sea
Deathwing Self: Ewww! It's all over! Oh OH! And it's under my scales! I'm so going to destroy them now!
3 Comments

I guess Soon isn’t what it used to be… I made this mini comic this morning, as a continuation of my epicless angst. See, I’ve been logging in to chat with my guildies and beg in the streets of Dalaran for booze money. So, I made this comic as an illustration of my plight.

HOWEVER! When I logged in, not a moment ago, what do I find? My beloved main back where he should be, with stuff galore! Blizz finally came through for me! Guess it was about 7ish days to get it all back.

So… Thanks Blizz! >D

Anyways, guess I’ll post this anyways, since it’s done and all… XD

Also… on a side note… check out my Haxored comic on DeviantArt HERE, there were a lot of great posts on ways to keep your account secure and some good info on what to do afterward.

Origin of the Species 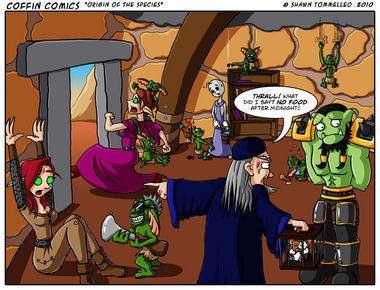 Ever wonder where all those “Goblins” came from! Well now you know. It was many years ago, Thrall received a Winterveil gift from Greatfather Winter and didn’t do as instructed! Always remember, when you get a pet, never feed it after midnight! Who knows what will happen!

Needless to say, someone has to take care of them, even if they are evil little green buggers that cause all kinds of chaos… So… Welcome to the Horde my Goblin friends! Try not to burn anything down while you’re here…

This week’s cameos include the sisters Lanah and Nolana. >)

Panel 1: "Goblins" are going on a rampage destroying everything and tormenting everyone
Mr. Wing Thrall: Thrall! What did I say? NO FOOD after midnight!
11 Comments

That's right! I woke up to a nasty little notice in my email that my account had been hacked, guild bank looted, and characters deleted! Just lovely huh?

You think you're safe... running the latest antivirus, antispyware, and firewalls; but it just goes to show you, it all amounts to nothing! So, my order for an Authenticator will be in shortly! >)

To everyone out there: Go get one, nothing on my computer suggests it was a keylogger so they must have done it another way. I don't know how, but in any case, everybody should go out and buy one NOW! Let my hubris be a lesson to you all!

To the account hackers: Well... if I find you... lets just say "broken legs" will be the least of your concerns...

ps... Sindella makes a cameo in this mini comic.

Haxor, The Evil Twin
Panel 1:
Sindella To Sinnister: I think there's something wrong with Coffin...
Coffin To Everyone: Howdy There!
Panel 2:
Sinnister To Sindella: Did he get a new haircut?
17 Comments 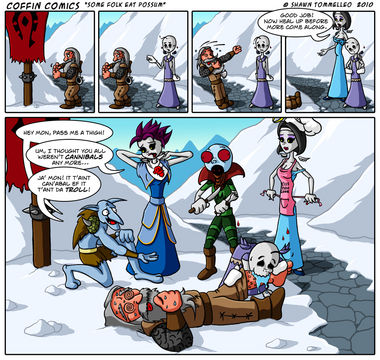 Hunters have a lot of tricks up their sleeves and as a former hunter, I have to say… I have done this more than I’d care to admit!  Sometimes things get a little too dicey in PvP and playing dead seems like such a good idea.  Feign Death drops you from their target, you look dead, and unless you’re within an inch of your life with a DOT, then MAYBE they’ll go away.  Especially if all kinds of chaos is going on around you.  Of course, there’s your faithful pet standing right next to your body and the confused look on their faces when just a second ago you had full health…  That’s when things usually don’t go very well…

(Just in case there’s some confusion, especially with all you Alliance players, the Forsaken have the ability Cannibalize, which lets them eat dead humanoids to restore some HP.)

This was actually one of the first ideas I had back in 2007 when Coffin Comics was but a dream.  Seems like such a long time ago now…

Panel 1: Salty Bill is attacking a flag in AV
Panel 2: Coffin is standing behind Salty and Salty is startled
Panel 3: Salty Feigns Death to avoid being killed
Panel 4: Coffin looks at hands confused
Ell To Coffin: Good Job! Now heal up before more come along!
Panel 5: Everybody gathers around Salty Bill ready to eat him, who is playing dead and very scared
Twotoes To Group: Hey mon, pass me a thigh!
Elasue To Twotoes: Um, I thought you all weren't cannibals any more...
Twotoes To Elasue: (Yes, it is not cannibal if it isn't a troll!) clarified
14 Comments

Well, ok… that’s slightly melodramatic… but I did just update my Comicpress version and had a mini heart attack trying to do it.  Very scary when everything goes back to default and you forget what settings you had…  But, I think I got it where it’s supposed to be!  Maybe…  XD

In retrospect… Comicpress Companion is a VERY good thing cause in my techtarded state, I didn’t do any of my mods using it… so… everything went poof for a short period of time. So if anyone sees things go wonky anywhere, let me know!

Yup, that’s right!  At Coffinshaker’s Mouse Pad emporium we’ve got your mouse pad needs covered!  For only $9.99!  I have the latest ones up now with more to come soon. (I now know that I should have formatted these MUCH better for ease of future printing… well… live and ya learn right? So it might take me a little time to format the earlier stuff correctly.)

Check them out HERE 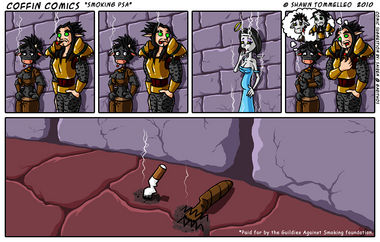 Having noticed that quite a bit of my comics show cigarettes, I thought it was time we sat down and had ourselves a little chat.  Sure, smoking might not seem like much at first… You take a 5min break after you down a boss.  No big deal right?  That’s like 1 in an hour or so?  But then it happens…  It’s a smoke break after you clear some trash mobs, right before you fight the boss… Then a smoke break after a wipe.  “Lets take a break, watch the training video, read up on the fight, etc… Just take 5min.” you say.  That’s when it hits you!  You’ve been “forgetting” to taunt, equipping your RP gear, healing yourself instead of the raid… just so you can wipe and get another fix!  You try to apologize but nobody can hear you in Vent cause you’ve got 10 cigs shoved in your mouth all at once!*

*above scenario may be slightly over-dramatized…

In all seriousness… I’m not going to say what you should or should not do if you’re a grown up, that’s up to you.  But it’s not the healthiest thing around.  And kids, just wait till you’re old enough to make informed decisions; it may seem cool at the time cause everyone on tv does it, but wait till you’re 30 and get winded walking to the bathroom.  So let this be your intervention!  Go grab yourself a carrot or something and kick the habit!  >)

Panel 1: We see Coffee and Nith smoking all cool...
Panel 2: They see something over yonder
Panel 3: It's Ell! And smoke is leaking out of her body parts!
Panel 4: Coffee and Nith imagine themselves as undead
Panel 5: *Paid for by the Guildies Against Smoking foundation
14 Comments

State of the Puter Address

Well, I’d like to take some time to give an update on the whole computer changing experience…  This was a hard one for me, because for nearly 3 years now I’ve been all Mac.  So migrating my workflow to Windows 7 was a bit painful.  As you all know, I needed a work computer for my art and whatnot, so the most cost effective way to do that was building a pc.  If Mac ever made their OS available to the pcs, I’d be all over that.

But I’ve spent some time with the old pc now for a month or two and I have to say we’ve had our ups and downs.  Mainly downs at first.  See, I bought the 64bit version, since it would go very nicely with Photoshop and whatnot.  However, I did go into this knowing it doesn’t always like to play nicely with non 64bit software.

Actually, for the first, what, month or so it kept randomly shutting down and crashing!  And that’s the whole reason why I got this!  To get something that worked because my Mac did the same thing!  Well, you’ll all be happy to know it runs perfectly fine now.  For such a complicated and expensive piece of software, it is amazing how little it takes to trip the whole system and watch it tumble down.

A setting… a single setting… that doesn’t logically seem to effect ANYTHING to do with why it would crash in the middle of your work.  But there it is!  Basically, it was just in the “power management”, I had to set it to the maximum instead of automatic.  You know, the setting that controls when to put the puter to sleep, like 10min of inactivity kind of thing… NOTHING to do with “do you want to crash while drawing? yes/no?”…

Other than that… I’ve actually been fairly impressed with Windows 7 (aka, Mac Jr.).  It seems to run things much better than my (luckily) brief exposure to Vista.  Heck, even got some free to play games on there!  Cant do that on a Mac!  So, that’s where I’m at with this.  Hopefully if anyone out there has suffered with shutdowns with their new Win7 64bit, this tidbit will help.  >)

In other news, WOW.com had a nice little announcement just the other week about putting WoW on an iPad… Ok ok, as ridiculous as this sounds, the story harbors a more important, and practical, point.  STREAM GAMING VIA A BROWSER!  What this means, is that Mac people will FINALLY have the service to play ANY game they want!  Linux too!  I guess the concept is similar to VNC where it takes your key/mouse input and sends back a stream of the monitor… but a little more sophisticated.  I’m just liking the impact that this could have on the Mac community.  A nice outlet to get all those pc games (and other software, like maybe Office? Adobe Suite? expensive things like that at a lower rate?) but not even have to install them!  Heck, this is even a triumph for people with older pcs.  The stream is the same and as long as your net connection is good, you can have the visual effects of a wicked high end gaming pc on your Tandy 1000!  Man, where were these guys a few years ago?  So anyways, check them out, still in beta but worth a look - Gaikai.com